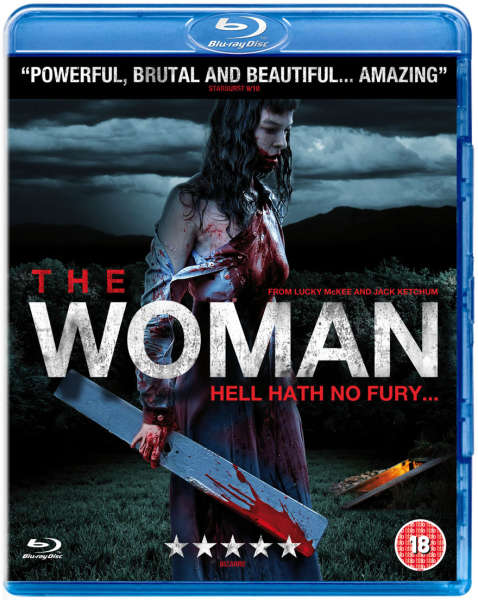 The Woman is an astonishing film and a breath of fresh air. Well… I say “fresh”, but by the end, it’s more “poisonous” and, I hope, toxic enough to leave a mark on American horror, because this sort of thing is essential for the genre to keep respect and relevance in the face of mainstream laziness, even if you don’t like it. It can afford comparisons with the original Hills Have Eyes or Texas Chainsaw Massacre; a satirical and vicious attack on the notions of family and human nature, in particular the sexualisation of women, bolstered by a rich film production from cult director Lucky McKee that is often beautiful, if that doesn’t sound absurd. It’s somewhat at odds with what you expect from cult horror flicks. For a start, consider that much of the film, including the soon to be infamous ending, is in daylight and it is tensely psychological rather than shock tactics so that by the time the credits come up on that brutal finale, it’s more like a release of pressure and you might find yourself thinking of the metaphors that Romero’s best zombie films played with. The zombie sub-genre has surely been all but lost to parody (albeit in excellent style) so The Woman might fill the gap.
It is the story of a family man who finds a feral woman living in the woods behind his house. He captures her and calmly recruits his wife and children in the task of civilising their new friend. Are his motives altruistic? His deluded personality and meek wife and daughter suggest not and the untamed prisoner becomes an unpredictable factor in their dysfunctional lives.

Apparently it is a sequel to Offspring, both films being written by Jack Ketchum, but I haven’t seen that and I highly recommend you too go into this blind if possible. I liked that I didn’t know where the woman came from or why she was living feral. It may be this film is going over themes already covered, but the story is so isolated (she doesn’t speak English, so can’t even give a line of dialogue hinting at her history) it doesn’t matter to new viewers. Plus, both the good and bad critical reception The Woman has received implies it is the more interesting of the two. Certainly McKee directs with a confident passion and focus, suggesting he was able to bring a great personal connection to the story, despite not directing Offspring. Seek that film out as a prequel instead.

The premise and some early sequences hint at torture porn (it isn’t), but while I’ve always leapt to the defence of Hostel at least (not so much the lazy Saw franchise), The Woman is leagues ahead in ambition with a concerted effort to creep under your skin and stay there for days. So much so, it makes an utter mockery of the current penchant for glorified violence that treats abuse like a set piece. The violence in this film is ingrained, necessary and even reserved for quite some time. The narrative seems to signpost many developments and makes them obvious, at odds with dialogue which contains zero exposition, and it has a tendency to be episodic if you’re looking for something wrong. But in fact I like the structure, as it relies on impressive editing and characterisation. This is a film that wants to be clear and needs you to understand even its most subtle tricks, because only with your eyes wide open will you see the big picture of what it’s trying to suggest. Still, it keeps you on your toes as you decide just who are the heroes and villains of this grimy tale. Don’t look for a mystery or cheap scares, but be prepared to wallow in a rich, occasionally humourous, yet always sinister attack on human nature.

Sean Bridgers plays the instigator, Chris Cleek. To all appearances, a successful business man and devoted husband and father, but you quickly realise the family aren’t as happy as he at least expects them to be. His wife Belle (McKee regular Angela Bettis) is subdued and weak, his daughter Peggy (Lauren Ashley Carter) depressed, hiding a secret, and his son, with whom he is closest (note the divide between male and female), seems the happiest, but has a cruel bullying streak against girls. Zach Rand who plays the quiet Brian possibly has the most interesting role, because his tendency to bully is done on the sly. It’s a delicate and vital character. The Cleek family also features Darlin’ (yes, that’s her name!), who is only five or six at most. She is played by Shyla Molhusen and is an absolute charmer. In many ways, she embodies the contrasts and absurdities in the film; her innocent acceptance of the prisoner gives the story some of its best moments.

In the early stages there is a great deal of nervous humour to be had from the bizarre manner in which Chris calmly secures his rabid prize and then introduces her to his family. He coolly explains it will be their project and responsibility to civilise her. If The Woman can be thought of as Romero-esque satire, and in turn satire is a bedfellow of comedy, it might help you understand the tone of the film when I say that Bridgers reminded me of Will Ferrell! Especially while he explains the “ground rules” to his shocked family and relates how he lost his finger (that’s a great moment, by the way!) to the amusement of Darlin’. While it would have been interesting to see Ferrell use his dumb expression to hide such vicious misogyny in a serious role, I doubt he’d be as believable as Bridgers, presenting us with a man convinced absolutely by his own screwed up views and maintaining an edgy balance of unpredictability. Much of the tension comes directly from him.

The Woman herself is played by Pollyanna McIntosh in an excellent performance as a “devil with a handsome face”, as McKee describes her in an interview included on the Blu-Ray. She has little to do in terms of an arc or dialogue, it’s all about consistency and patience. McIntosh is a lovely natured and attractive English actress, so her transformation into this feral creature is fantastic, especially because, despite her disgusting appearance, she retains her considerable natural sexuality. The film has a sexual undercurrent running throughout, perhaps most obviously embodied by the stunning Carlee Baker, playing Genevieve Raton, Peggy’s teacher, who worries about her pupil and wants to help her. Her casting as a very attractive lesbian borders on exploitive! But it’s just another thread of the satire and she is excellent as one of the most honest natured characters. The story could easily have featured a very religious family, but instead, by considering lust and perversion at the expense of women as the underlying factor, it adds some fresh dynamics and asks some difficult questions about how often the baser animal instincts are buried to appear respectable, and just what is important in a family. Even Darlin’ gets in trouble for kissing boys, and later asks for her cookies to be shaped like little men!

It’s a challenging theory and part of the reason that The Woman has attracted controversy to the extent of critics abandoning the Sundance screening in disgust and accusations of it being nothing more than dressed up torture porn, but as I said before, it really isn’t. Instead, it is intelligent and playful, but with a sharply focused message that maybe scared the critics by being close to home. This film is essentially one very fucked up sitcom! But if by the time the bloody mess of the sickening final act has completed, you still haven’t made your mind up about the intentions of filmmakers, watch right through the credits. There’s a wonderful surprise in a animation that might make you consider watching The Woman again, just to find where the perspective fits in…